Nokia identified as No.1 vendor of 4G public safety technology by Current Analysis in global study of 100 operators

International Wireless Communications Expo (IWCE), Las Vegas, US - Nokia has been identified by market intelligence provider Current Analysis as the No.1 vendor for the delivery of technologies "beyond 4G" in a study compiled of 100 service provider executives around the globe. The results cited public safety as a key priority for 4G application, with Nokia also seen globally as the leading vendor, by far, of 4G-based public safety technology.

The Current Analysis study, Carrier Investment Plans For Evolving Today's 4G networks Towards A 5G Future, is intended to highlight the leading priorities of telecommunications operators over the next five years. Operators were asked to rank the use cases they planned to support as 4G technology evolves and rated the application of 4G for public safety as the number one example.

The study reveals that Nokia is seen as a clear leader in the public safety space, being named number one by a wide margin. Nokia has worked with a variety of public safety agencies to deploy 4G LTE technology in support of applications such as real-time video communications between first responders and command centers, as well as vehicle tracking and broadband connections to allow teams to quickly and securely obtain and share detailed information in emergency situations.

Nokia has a wealth of public safety experience, working with customers in the public safety space for 60 years. The company deployed 4G LTE technology for the New Jersey Public Safety broadband network, supporting the high security and high-quality demands of Pope Francis' 2015 visit to Philadelphia. Last week Nokia announced that it will deploy a 5G-ready next generation network to deliver mission-critical smart city services for Nedaa, the Government of Dubai agency and Professional Communication Corporation.

Nokia's commitment to public safety is underlined by its leadership in 4G LTE technology, which offers the high bandwidth and reliability required for mission-critical operations, coupled with its strong position in the market for Internet Protocol/Multi-protocol Label Switching (IP/MPLS), optical and packet microwave transport technologies essential for the data backbone that underlie radio access networks. In collaboration with other industry leaders, the company also offers a rich variety of multimedia tools, devices and applications for first responders and other personnel.

At the IWCE in Las Vegas from 21-25 March, Nokia will highlight its enhanced, and expanded end-to-end portfolio of products and solutions for public safety, including:

Peter Jarich, Vice President, Consumer and Infrastructure, Current Analysis said: "Given the costs involved, few public safety agencies will be able to fund the rollout of a robust communications network on their own; they will look to service providers for help in leveraging existing networks and network assets.  It's not surprising, then, that the rollout of public safety networks is uppermost in the minds of operators now.  Where NFV and IoT will play a role in the development of public safety networks - offering new efficiencies, lower latency and the enhanced connectivity needed to ensure the highest level of situational awareness for emergency first responder teams - it's also not surprising that Nokia is seen as a leader in this space, backed by a comprehensive ecosystem to meet their needs."

Henri Tallon, head of Public Sector at Nokia, said: "The results of the Current Analysis survey clearly reflect the trust that operators have in our technology, something we deeply value and work hard to sustain on a daily basis. Operators can play an important role in the development of secure, scalable broadband networks, and as an established leader in LTE mobile broadband with security solutions that cover both networks and devices, we are working with both operators and governments worldwide to understand and meet their most stringent requirements of mission- and business-critical voice and data communications. A proofpoint is the 55 customers across the globe who have chosen our IP or 4G LTE technology for their mission-critical networks." 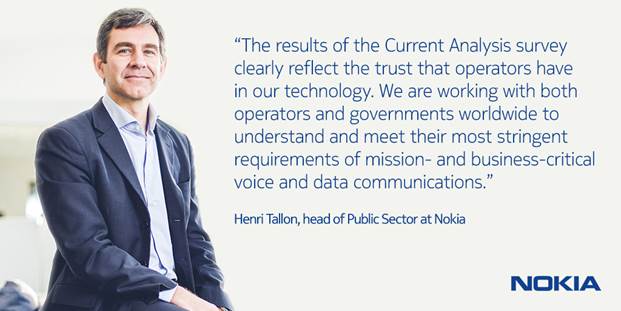 Did you know?The company's latest innovation being demonstrated at IWCE - Network in a Box - is a rapidly deployable, compact and portable solution that establishes mobile broadband connectivity in minutes. In a recent customer demonstration, Nokia showed how Network in a Box could meet the communications needs of search and rescue personnel in remote areas of a country.

With state-of-the-art software, hardware and services for any type of network, Nokia is uniquely positioned to help communication service providers, governments, and large enterprises deliver on the promise of 5G, the Cloud and the Internet of Things. https://nokia.com