Nokia and du demonstrate the 5G future at GITEX 2017

The robot demonstrates how the ultra-low latency and high-reliability of 5G technology will usher in automation in industrial processes, promising substantial improvements in efficient production. With extreme reliability, ultra-low latency, and high speeds, 5G will be a key enabler of the 'Fourth Industrial Revolution' by opening up new possibilities for applications, such as automated responsive robots in industrial production. Nokia and du's demonstration of a dual-arm collaborative robot (also known as 'cobot') - which is connected via 5G to an automated parts and material handling platform - shows visitors to GITEX how 5G's near-zero latency can visibly transform industrial operations with fully flexible, automated production.

Saleem AlBlooshi, Executive Vice President - Infrastructure & Technology, du, said: "The speed with which our networks are evolving is astounding, and it will only grow with the growing demand. In the UAE, for example, we are in the process of building a smart city - a networked society of individuals, corporations, government services and things - and 5G use cases that will drive the future solution. If there is one thing that is certain about 5G today, is that there will be no 5G big bang. 5G comprises of many components that will be evolved on our 5G journey. In our pursuit of this 5G journey, du is actively looking at the potential 5G use cases from now. Our demonstration of the dual-arm collaborative robot at GITEX is one of these futuristic use cases that show how the 5G's near-zero latency can potentially transform industrial operations with fully flexible, automated production."

Rima Manna, head of du customer team at Nokia, said: "In recent months Nokia has been presenting its concept of the 'Fourth Industrial Revolution', and we are now delighted to work with du at GITEX to showcase these innovations in this region, and drive further thought leadership on what these technologies can do. We look forward to exploring more 5G use cases with du."

Did you know?Nokia is at the forefront of 5G research and industry collaboration. The company contributes to joint industry work, standardization, regulatory discussions and participates in collaborative research such as Europe's 5G PPP (5G Infrastructure Public Private Partnership). It leads the 5G Mobile Network Architecture consortium in the European Union which defines the 5G architecture. 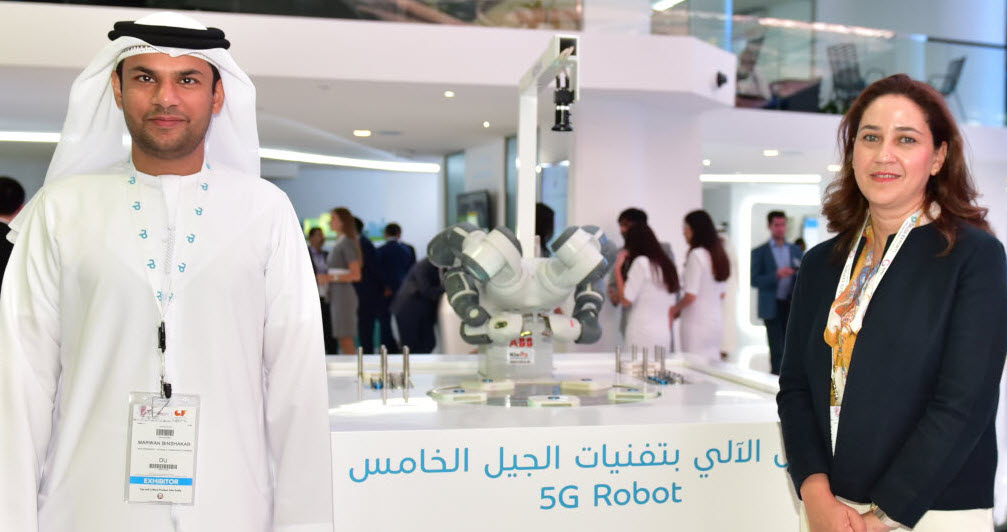 About dudu is a vibrant and multiple award-winning telecommunications service provider serving 9 million individual customers with its mobile, fixedline, broadband internet, and Home services over its 4G LTE network. du also caters to over 100,000 UAE businesses with its vast range of ICT and managed services. Since its launch in 2007, du has many UAE firsts to its credit, including introduction of Pay by the Second® billing system, IPTV and self-service portal.du is ideally placed to support the realisation of UAE Vision 2021 and transformation of Dubai into a Smart City. du is also the official strategic partner of the Smart Dubai Office and the platform provider for Smart Dubai. Following the successful testing of the Middle East's first Internet of Things (IoT) network, du is on course to complete deployment of its IoT network in 2016.

Brand Finance ranked du as the 12th most valuable brand in the Middle East in 2016. du previously won the coveted Brand of the year title by Superbrands Middle East in 2013. The company has been recognised with several other awards such as ISO 27001 certification of Managed Security Services and having the distinction of opening UAE's first LEED Platinum Certified Green Shop. du also has the unique distinction of the first telecom in the world to release Sustainability Report based on GRI-G4 guidelines in 2014. du is also credited with du's world-class teleport is the largest of its kind in the Middle East and ranked among the top teleports in the world by World teleport Association.

du is 39.5 percent owned by Emirates Investment Authority, 19.75 percent by Mubadala Development Company PJSC, 19.5 percent by Emirates Communications and Technology LLC and the remaining by public shareholders. Listed on the Dubai Financial Market (DFM), the company trades under the name 'du'.

About NokiaWe create the technology to connect the world. Powered by the research and innovation of Nokia Bell Labs, we serve communications service providers, governments, large enterprises and consumers, with the industry's most complete, end-to-end portfolio of products, services and licensing.

From the enabling infrastructure for 5G and the Internet of Things, to emerging applications in virtual reality and digital health, we are shaping the future of technology to transform the human experience. nokia.com