Beirut, Lebanon - Alfa, Lebanon's first mobile operator managed by Orascom Telecom, Media and Technology, will partner with Nokia on deploying a 3G and LTE-Advanced Pro network using Nokia AirScale equipment which shall provide an enhanced voice and mobile broadband experience to Alfa's subscribers in Lebanon. This is the first deployment of Nokia's 5G-ready AirScale base station in Lebanon.

In addition, the two companies signed a Memorandum of Understanding (MoU) at Mobile World Congress (MWC) to further evolve Alfa's network by applying the Nokia AirScale system across 3G, 4G and 5G radio technologies, including CAT16 use cases. The MoU also aims to leverage Internet of Things (IoT), small cells and automation solutions, as well as Nokia's latest network optimization services, innovations and analytical tools to pave the way for next-generation mobile broadband services which Alfa will pioneer in Lebanon.

Under the AirScale deployment agreement, Alfa will use Nokia's AirScale equipment to deploy a 3G and LTE-Advanced Pro network, which will enable it to introduce new services later in 2018, including Voice over LTE (VoLTE) and LTE-Advanced Pro. It also marks the first time that Nokia's energy-efficient AirScale technology will be used in Alfa's networks.

Nokia's AirScale Single Radio Access Network (SRAN) solution will be used to deploy 3G and LTE-A Pro. The 4G LTE-A utilizes carrier aggregation technology, which brings together spectrum from two frequency bands for improved speed and spectral efficiency. Nokia will combine spectrum from 800 MHz and 1800 MHz frequency bands for the implementation of LTE-A for Alfa. The deployment will ensure seamless availability of voice services and align with Alfa's plan to gradually shut down its 2G network and re-farm the spectrum for LTE services. A host of Nokia services will ensure a smooth deployment, including project management, Network Planning and Optimization, Care and training services.

Marwan Hayek, Chairman and CEO at Alfa Lebanon, said: "We are delighted to work with Nokia on this major deployment as part of our aggressive roadmap to install 500 new 3G, LTE and LTE-A sites before end of next year and our digital transformation strategy through which we are eyeing to be among the first operators to commercially launch 5G. We are confident that Nokia's proven expertise will help us maintain our leadership position and enable IoT, as well as continue to provide world-class quality of services to our subscribers."

Roger Ghorayeb, customer team head for growth in West MEA at Nokia, said: "We are committed to helping Alfa and other service providers transform their networks to meet surging demand for mobile data. The introduction of Nokia's 5G-ready AirScale offering will enable Alfa to prepare for the launch of next-generation services. It will also help them to launch services faster, while simultaneously reducing operational expenditure."

Solution details at a glance: 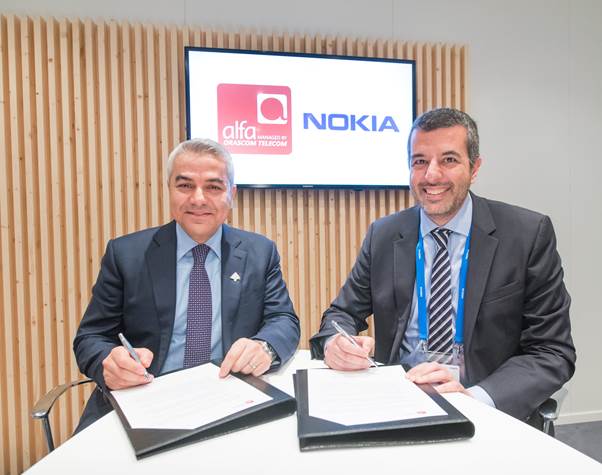 Photo: MoU signed by Marwan Hayek (on the left) and Roger Ghorayeb (right) at MWC.

About AlfaAlfa is Lebanon's first mobile network, managed by Orascom Telecom, Media and Technology (OTMT) since 2009. Alfa capitalizes on the vast know-how and international expertise of its Management and Leadership in order to deliver quality and professional solutions to the country's mobile sector. Technology innovation and being the pioneer operator has been a constant focus at Alfa since inception, especially in recent years, introducing the latest global mobile technologies in Lebanon. Alfa has achieved several milestones as part of this ongoing technology innovation journey to 5G and the Internet of Things (IoT) world. Among them:

About Orascom Telecom Media and TechnologyOTMT is a holding company that has investments in companies with operations mainly in Egypt, North Korea, Pakistan, Lebanon and other North African and Middle-Eastern countries. The activities of OTMT are mainly divided into its GSM, media and technology and cable businesses. The GSM activities include mobile telecommunications operations in Egypt, North Korea and Lebanon. The media and technology division consists of OT Ventures/Intouch Communications Service and the OT Ventures Internet portals and other ventures in Egypt, including LINK Development, ARPU+ and LINKonLINE. The cable business focuses on the management of cable networks.

About NokiaWe create the technology to connect the world. Powered by the research and innovation of Nokia Bell Labs, we serve communications service providers, governments, large enterprises and consumers, with the industry's most complete, end-to-end portfolio of products, services and licensing.

Nokia is enabling the infrastructure for 5G and the Internet of Things, and shaping the future of technology to transform the human experience. nokia.com